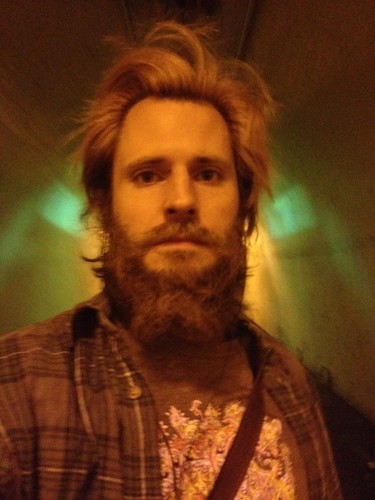 return to the light
woke at 10:30
but I'm still up now
so I don't imagine a huge change
just sleep deprivation in store
but the day had its beauty
slow push ups
dermatologist
digging stuff off my face
burning stuff off my feet
I winced around
looking for comics
-Can anyone recommend Alan Moore's Promethea?
I rarely read anything anymore
but for pixels flickering across my eyes
(mostly while I'm typing. . . )

ah, I flipped through finding people in union square beautiful and repulsive
so didactic. . . no. . . diaphanous. . . no. . . dichotomistic. . . polar. . . gemini
some beautiful troll on a bike
did not appreciate my taking pictures of him
ah. . .
I met up with Koos
a little frazzled from trying to get some lenses cut for some frames I bought last autumn
we went up to times square
failed to buy tickets for a show for lack of good tickets for my discount code
ate Thai (delicious duck. noodles. green tea ice cream)
I had a cocktail
is one enough to make me nauseous when cigarettes are added?
we went back to union square to watch Moonrise Kingdom
held hands
laughed and cried and cringed and
what's the emotion people mean when they go "squeeee!"?
we stood at the tip of the triangle where Broadway & 4th split
cars zooming around us
hailed a cab
a ride that was truly terrifying
cute seikh
but on his phone and agro
we smoked another cigaret in front of the radio city music hall
and I felt terribly nauseous
he wished I could just sleep
just rest
I. . .
I'm in a state if being disengaged from my desires
it's keeping me out of trouble
and depression (wait. . . is that a symptom of depression? shit, yo..)
I went home
walking by more seikh can drivers
hello
I was rapt in the feeling of innocence
that movie. . .
was it false?
it certainly inspired. . .
yeah
maybe I just wanted to be innocent again
but on the train I finished watching an episode of true blood
which made me sigh
and some guy was yelling with bulging eyes
telling all the african to go back to their own fucked up countries. . .
he looked like he had a good deal of african through him
I almost threw up
heat flushed through my body
I gasped for air

when I got up to leave
I couldn't get out fast enough
but while I waited for the door to open
I stated him in the eyes
just. . .
just so he'd know he was being heard. seen. just to let him feel it

I wished I could love and see the love in all creature
like Snow White and the bridge Troll
but. . .

I walked home
talked with T a while
face time
imagining sign language this way
snippets of the day:

I vacillate
in beauty

I tried to write
but demanded I keep myself thoroughly distracted
not a huge waste
just a constant ebb of attention
now look at it
6:23
time to switch off