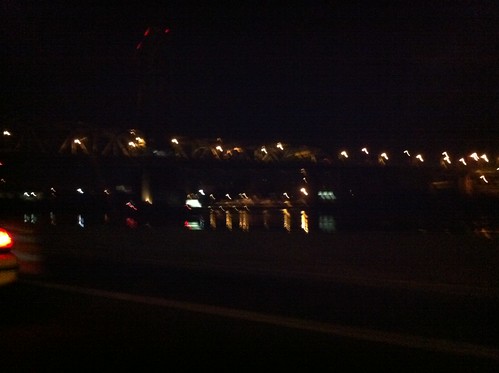 but it's not just convenience
I love it when I can take a taxi home
up the FDR, the Harlem River Drive

I don't know the rules
but I remember
back when i drove across the country all the time
driving a friend's U-haul from downtown to uptown
and someone pulled along side and said to my passenger "There are no trucks allowed on the FDR!"
back then I called it the "east side highway"
but it's not

i don't know if it's that Brooklyn, Queens & the Bronx are more visually interesting at night than NJ
or the road is closer to the water
and casts more reflections
or the "river" is less wide
I don't know
but I find it so beautiful...

grateful to live here
to romanticize my relationship with The City

as I left my client
I decided I needed to listen to LCD's "Home"
but half way up the river the driver asked me something and I heard him
and turned it off
- he was asking me about a song on the radio
"what is this one? what's it called? I remember hearing it when I was a child! it's such a great one!"
it was "These Eyes" by The Guess Who
I wasn't entirely sure if it was them or just "The Who" -- always making that mistake I looked it up and verified it for him
as we sailed up the night river
I had a nostalgic flash of all the car trips we took when I was a child...
between Michigan and Indiana
I'd been talking about them this morning because of Meatloaf...
were those the only two cassettes my parents listened to?

where were you a child? I asked

"the Ivory Coast"
as the river rolled by
I tried to imagine what that must have been like
and what to say...
but he spoke again
"those were good times. so much better than now..."
which always strikes me odd
NYC is an intense place to live
if you like where you came from better
why live here?
(I know, I know... but...)

I asked How better? Why?

he said
"everything seemed OK... like everything was Alright"

I said
Everything is Still OK and Alright... we just know about the Pain and Misery now. but that's a part of life... it's good to know about and still know that everything is alright...

he said things were simpler... made sense!
and things are so expensive now!
and...

I cut him off:
You were a child!
of course you were happier
you were being taken care of
that's what's great about being a child
but things are always expensive
and life is always complicated
but our parents paid the price and did the work so we could play
we're just adults now...
we have to do the work and feel the pain
but we get to make it alright as well

he murmured something in affirmation
and I thought about us a moment
and the river
and my childhood car trips
not understanding Meatloaf or The Guess Who...
American Woman!

join the occupation
become a citizen of my nation

is it even possible to not have it belong to idiotic power/money monsters?
can I jump on that idealism wagon
of how we'll all be adults together and stop expecting some mythical parents to do it all for us?
can we say "we will" and mean it everyday for... as long as the next chapter lasts?