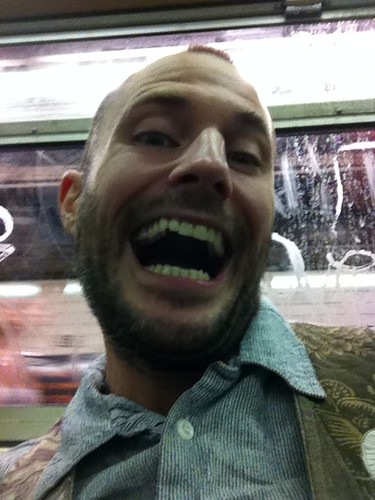 with K in the desert
linen blowing

not much emotionally moved today

R spoke of Uta's term: "empowered"?
no..
emblazoned? ("it said: break up the family and let's begin to live our lives..")
no...
something...
anyway
to be affected by the nature of objects on stage
real or imaginary
a hot cup of coffee...
the sun...

after that I sat and watched others
found it generally infuriating
and became sullen, tired, and paranoid
convincing myself, again, of lyme's disease
then desperately trying to cure it from my system
losing concentration and perception and drive

R pointed me for not replying to her email
and cited some actress saying "no amount of homework will compare to action" to learn, we must change our behaviour

the light was so beautiful
but the tired continued
and in the subway I realized I hadn't photographed myself
so tried some angles
and Fr.Coats suggested I not look so serious
I did a bunch of goofy shots
and this one was the last
so terrifying and mutated I had to use it

I guess I've got a beard again...
but I want to keep a shorn face this year
I will cut it on 33