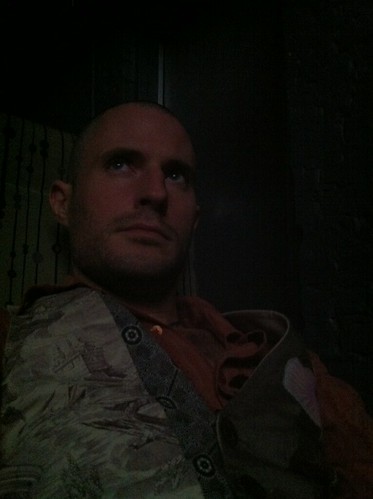 i often wonder if I'm an imbecile or a savant

I felt emotions swimming between us
almost able to articulate them

still
it is exhausting and I am awkward

oh
in practice today I really felt how comfortable I feel when closed down
and how boring they is
and how very terrified I can feel open and vulnerable grappling to be present with myself and another person...

I wanted to lay naked in the sun
but no such luck
after the angel left I wasted a few hours feeling scattered, eating a brownie and going crazy on scruff
I don't even want to have sex right now
the compulsion is just absurd

and I stood on the sidewalk massaging a beautiful bear/boy/beast
tumescent and connected...

after cutting J's hair
I made him do pushups, pull ups and some core-strengthening yoga
then i put up the picture of the green-sands beach
put my clothes away
and taped my fraying wire on my headphones

we spoke of how he looked kinda like "the standard Bear" now
but as the oil kicked in I started photographing him
we got tickets for Film Socialismé, Jean-Luc Godard's new film
then grabbed slices of Joe's
stood outside IFC eating them
as some sculptor approached Jorge and asked to photograph him
"I sculpt interesting people... of newspaper"
his battery was dead
I let him use mine to take some snaps and send them to himself

the movie had three acts
the first I was engrossed
even though I cared little for the political plot
I loved the construction
(varying digital qualities, which I always love... strange word overlays to accentuate ideas. no easy subtitles. guerilla filming in a captive space)
the middle act I found tedious
and very high
I scrunched down in a private seat and dimmed the screen
correcting the sculpters email, sharing with Jorge through email, uploading to flickr & facebook
and photographing the remained of the film as it began to entertain my attention again
it was inspiring

I started explaining the practice I'm doing to him
and we went to Julius' to have a drink and do some Pinch&Ouch repetition
we're able to be pretty present with eachother when we try:
we're friends

the music became amazing and I started singing instead:
Shakespear's Sister
That Joke Isn't Funny Anymore
The Boy with the Thorn in His Side

7 plays for $2
I put on
Carrie-Anne (where my sister got her name)
Midas in reverse (liked the title, not the song)
Rum and Coca Cola
Do The Hustle
Let 'Em In
Sax and Violins
Memories Can't Wait

beautiful
split a burger, had Guinness
had table service
and such kindness

the world was just loving us tonight

alright
thanks again
now
to rest!

--"I pulse in order to enchant
realizing receptivity."