when I get in bed... I slide back into the feelings of my dreams 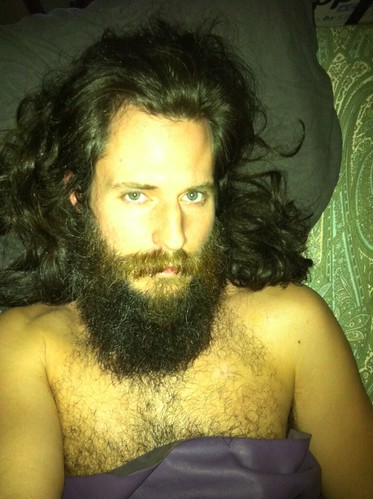 i climbed up to an over-walk cliff area
and met a man up there
we didn't speak much
we were friendly and bashful with eachother
he was large, oafish, slow, beautiful beast
stubbly face, strong jaw, 40? 50?
mustache
we interacted without talking much
we were very close
we ordered pizza
while we waited for that
another man came from the other direction
and the first i was talking to wandered off
this second was a little younger… ten years perhaps (late 30s or mid 40s)
he spoke better english, but we still didn't talk much
and became very physical immediately
cuddly
what did we DO?
i don't know
it seemed like a long time
and very intimate
but not so sexual as i remember it
his name was Marcel
we were laying around by the fire
the other man came back, we all sat on the ground together
as well as the women from the wheel chair
as dawn approached
the missiles started firing:
we were lounging in a missle firing range
groups of three or four would shoot at a time and whiz right over my head
i could see they weren't scared so i tried not to be
but it was terrifying to me
and the whole mess of this park made sense

i decided to go for a walk
past burning husks of refrigerators and appliances
a little nervous as to what i might find
but walking around the ridgeline and down
through a cyclone fence
i found myself in a children's park
in the morning
kids everywhere
and a whole bunch of land turtles walking around near the playground
i said hello and good morning to the mothers watching the children
i was astounded and returned to the bombing range
there were people all over now
many girls, young people
teens and twenties
activist types
there was a pot farm
it was all very farm-y
commune-y
i went into the house and found the first older man
i believe his name was Rick
we cuddled up and slept
i lived there for a while
alternating between spending my time and affections with Rick and Marcel
and eventually another man i think was named Phillip
i was there a night
or a few weeks
i had thought i came here to take a break
i was living here
or visiting here
i had a conversation out on the steps
about how they were selling the weed harvest to bloomingdales
i repeated it like a moron: incredulous
and announced i must figure out how to move here and not return to america
i didn't have time for the level of bullshit they live through there!
Where's Rick?
i cannot convey the amount of intimacy
the love, affection, closeness
it was the most mysterious part of the dream
how much in love i felt with all three of these men
how i would spend time with them
not being on the computer or playing with my iPhone
not even talking much
just being, looking, connecting, touching, doing…
as if in shifts it all worked out

one day i became friends with some of the girls and went for a car ride with them
we had talks about how nice it is to be only with women or men
i was trying to explain my homosexuality
how i'm not just attracted to men, but a specific type
and how i can appreciate all, including women, but not with a natural passion…
i remember saying that being with both genders of people is difficult because of all the differences
so to eliminate one of the genders really made things less scary and more easy to be open
somehow alluding to menstruation and how women felt better because they understood their changes
mens changes, i said, were more subtle than these
and, where i come from, they are often ignored out of fear of attack or ridicule
but we get to be sensitive to eachother here, like this…
we were hanging out on the front steps (like a subway tunnel entrance into a rock face, where we lived)
i was showing them the various noise makers on my iPhone
i could tell Rick was very upset
and was avoiding me
he stormed off inside
i had to corner him and make him speak to me
we were both on the verge of tears
he was bitching about the technology i was all of a sudden using again
then brought of Marcel and Phillip
and ultimately that i was leaving, i was a vagabond
and my heart was broken
how could i explain how much i loved each of these men and how i wanted it like this?
no one had had a conversation with me about this yet
i assumed it was all understood
and perhaps it was
but Rick was more sensitive
they were all so similar
themes and variations
why were the smiles and joys so hard to retrieve?
what was i supposed to do about my life in America
could i possibly be happy just staying here
with three loves!
we didn't even speak much
i had no idea how many secrets they had
what the majority of their lives were about

i had come home from where i slept on the floor
new year's morning
3-8, waking at 4 and 5….
i'd lost my voice as i was going to sleep last night
and when i woke this morning all i could think was posting that on Facebook:
"i lost my voice on New Year's Day: i hope that's not an Omen"
and of course it was the first thing Michael said when i told him.
"Maybe that's some sort of Omen…"
i came home intending to sleep it off: make up for the sleep i didn't get and hopefully my voice would return
back at my place
i drank water and potions
took a shower
and went back to sleep from 11am to 3

when i woke up from my nap
realizing that whole experience was a dream
and felt incredible remorse
loss!
i grabbed my iPhone to orate the dream
and could not: no voice
i busied around peeing and cleaning my sinuses out
still: my vocal chords are frozen
and after writing it out
i am left with such a heavy emotional weight
Rest, always difficult for me, often isn't restful
to have such an emotionally exhausting dream
i suppose a bit reflective of the time i've been having here in NYC
with a few people i love
and don't know how to be with
sex or not or life or all the pieces of myself that aren't working out
just thinking of . . .
how am i ever supposed to love or find the right way of being in this world for me?
HA!
as i wrote this i thought about how i was in a full Analysis session
my life
how i write to myself
the computer being a bit like the Analyst… "yes, go on.." is mostly all it says
and i do
i do
i do.