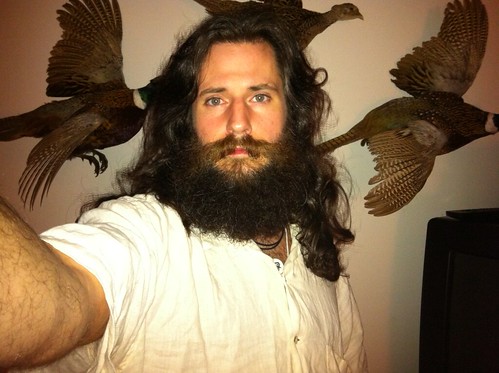 one of the experiences I had with my dad the only other time we were up here alone together did the same thing for me
I think I'm beginning to emotionally connect with him...

being with him let me feel the world of Midwestern Men that I always felt shut out of...
of course he helped me feel shut out as a child
but we've forgiven eachother now
he's open to me
and as long as I don't fail him
or go further off in opposition to offend him
I can travel with him and hear conversations about hunting
and nature
and appreciate small town Americana...

Maybe this is what makes me feel in love with Michigan: He obviously is

I never noticed... or acknowledged... that my dad is obsessed with music the same way I am... we'd always been enemies about it...

but I ganked some songs from the Internet for him and he told me stories
on the drive up here we listened to Beach Boys, Donovan & the Allman Brothers
inbeteren I played him some Grizzly Bear and Fleet Foxes

today
driving around Big Rapids
I was a bit in love with all the gigantic Michigan Men
and after two large stores
we stopped into a liquor store to get some Campari for me
the place was crazy
in that
it was like an old store
a ramble shack
a video store
yeah
there are still video stores up here
there are still tons of little crappy businesses that have great stuff
filled with characters...
I was overjoyed when my dad pointed out some guy in Meijer wearing "my hat"
a guy with long white hair and beard...
I talked with him a bit
he traveled around a lot when younger
lived on the coasts and in the desert
and moved back here so as not to have to keep up such an intense pace (I'm sure there's more to that story)
he sells books...

/
let me talk about hair for a bit

it's a little kid thing
I know
but it's funny

I looked in the mirror tonight and began to dread the rest of this cutting process
the horrible mid-length hair period
...

but those thoughts can be passing

I had a bit of a melt down earlier when we got back
the house filled up with people
and my calm appreciation lapsed...

I'd been driving
enjoying the snow
and trees
the ambient moonlight on the everything white
Sufjan singing to me about Michigan...

but here
it was the rest of my family that was freaking out
needing their needs met
and exploding
my brother and sister discharged into me and I felt overwhelmed and terrible
...but we all carry our weight...

people drifted to bed
and my room is filled with snoring...