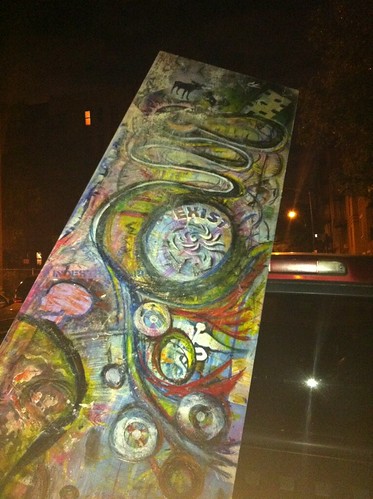 (art I found in the back of a pickup on my walk home.. left them a card sonthey can call me... I didn't want to steal it... but I'd like that if they're giving it away!)

you know
make some plans
they change
but things work out
give away the extra ticket anyway
whip the shit out of the boy later
The show was amazing and inspiring
inspiring
inspiration has been abundant lately
I bought $80 merch to support them
yo, of Montreal

D went home to love on his daddy
J walked down with mr as I talked with my mom
sounding like she on the brink of death
on her birthday!
poor kitten
I love her
and gave her some of my sparkling excess happiness from yesterday
she's feeling a bit better now

oh yeah, it was Friday
I don't like going out Friday
so J and I went back to G's in The Hotel in Chelsea
vegetarian burger from Lucky's was good
love their Sweet Potato fries
mmmm
G welcomed us in and J had never been there
so we talked a while
like
four hours...
til M arrived
J was fading and we had all sorts of plans
we rode up the A
sharing the headphones so he could hear more oM
while I wrote
that long rambling thing I've been writing since Wednesday
when we got to my house he crashed in the front room and I Kay in bed finishing that piece til 6:39 or something
ugh
sleep
so much for getting tons of stuff done
I did a bit of shopping
we ate the gorgeous vegetarian handmade empanadas from New Age Nutrition
and finished the book
edited the photos twice
replaced them
tweaked the cover
uploaded it and triple checked it
good
finished

now I just need to make a book for myself

I met this guy right after the hail fell on Thursday
someone I met months ago on silverdaddies
worked in the music industry his whole life
knows how to talk
and talks astrology
but isn't careful and said some nasty damming stuff about my prospects for relationships
like Never
which I felt in the innocence and arrogance of my youth
but have come to believe, faulty or not, that life is more satisfying with a Partner
well, sometimes it's better to have a tribe
if settle for that
I would...

another thing this guy said was how he wanted to write a book
and tried for a few years
and just couldn't get more than a few pages in
when a friend of his said
where's that book?
look: I'll help you
they got together every week for 35 weeks
talked for a few hours and recorded all of it
all of his stories
then he collaborated with someone he knee from the industry
who transcribed all the shit and edited
then they worked it into a book

he said: you can't do it Alone

and last night at the Hotel
J said, yeah, midwesterners always believe they have to do it themselves, all this self sufficiency shit
and M said Yes
don't do anything alone
we're here to collaborate
G concurred

so I have a self-centered project I wish to complete
who will help me?
I suppose
with the Internet
I can upload entire photo sessions of mine to other people and they can make their selects
send them back to me to layout
or to someone else to layout
or
I should just start having more people to come over to my house to make books with instead of have sex with

got a turkey avocado sandwich
headed across the park
hearing the music coming over the hills and fields, the Sea and Cale had already started...
which was fine by me
I only really know a few of their songs

Broken Social Scene was nice
tons of pot heads there
it was all so Het
the stone was nice
most of the set was great
but really
compared to last nights show
all glam, puppets, theatrics
and prophetic insanity
this show was kinda Meh
and the encore was almost all the songs of theirs I don't like
made the whole thing feel lime a trashy rock show

christened central park after 13 years with this city
... with a fucking drag Queen footballer!
I feel blessed!

the subway was sweet
"sex karma" singing in my ears
and now I'm sleeping, yo
goain up tae the Ren Fare tamorro
need me kip