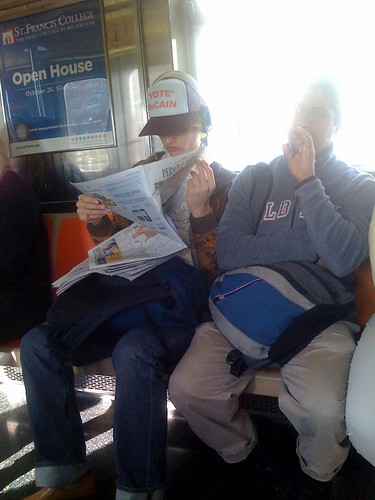 This mercury retrograde has been a good one in many ways: many things
have come to clarity and understanding...
However...
I've had a terrible time Being with most people
It took me days into this cycle to even notice it
And I've not been very good at stopping it
But I've been saying entirely inappropriate things often
So many times at the gathering
I repeatedly noticed people get up and move away from me
Some that I confronted denied any problem
But it was obvious to me
... After the fact

Last night at the bar I felt the same thing happening
Everything falling out of my mouth making people think I'm a total
asshole psycho wierdo
(2 out of three ain't bad?)

Then there is this hipster finance mother fucker
Is "vote"ing for mcCain Ironic because of his stylishly lame clothes?
Or is looking like a manga character make up for wanting to rape the
world?
He was reading the wall street journal
I dunno