the foals were rolling around in the grass, nipping at eachother
yes, that's where I lost him
at that
they got up
followed she and I into the wood
though we left them to climb a tree
silently
without expectation
at this point she became a young man with blond hair (leaving apart her jewish mystic female form)
maybe he was Owen Pallet
he was reaching for a bird
or monkey
i was frightened
nice clothes, wrong shoes
finding my own way up the tree
dead branches
uncertain it would hold me
uncertain why I was here
following him
yes, he was following a famous russian actor, or writer...
the birch
but we were on a huge barky tree of another sort
and in my impatient stasis I pulled myself up and noticed... stairs
I followed them up with my eyes across:
a long old wooden walkway through the tree tops
from where I was I could pull myself onto them
Owen was ten feet away in front of me, below the upper planks
he made a movement that showed me how flimsy the stability was
the wood looked dry and rotten, old and unmaintained
a dead-eras creation
nails missing on one side
sagging, easy to picture it swinging down into the forest below
I was imagining how to walk it without making the whole structure collapse and falling thirty feet (sixty feet(one hundred feet)) to the floor
following it with my eyes:
I knew it lead into the old compound
which was really where I needed to go
not following him/her around like this or placating my older suitor
but I hesitated too long there

and fell out of the dream
breaking into morning
uncomfortable and cold in my bed
anxious for the day I have in front of me
shouldn't I be waking up now? maybe it's an hour early...
if I just lay here like this
I will lose the thread into the dream entirely
my eyes weren't functioning yet
but I clawed my way back into the imagery through committing to remembered images

(song appears in my head: "when we go dancing/ underneath the city in the catacombs..." / "you were a little girl / with starry eyes... / now you're a sad young man and know one knows why...")(ah, "Old Orchard Beach" by Magnetic Fields)

it was about the women starting the theater company
Olympia Dukakis has changed sex in her role (once M Madrigal)
Gabriel standing there saying he did not believe in finding metaphorical meaning in dreams: the meaning is all implicit
perhaps it was him

the house now remembers to me as my parents house, night, moonlight
us walking out the front door
but the distances are larger
the horses rolling on the ground by tge pond, yet still a ways from the willow trees
yes, there's the forest there
interstitial
the structure gone: the old school (which? the one where we used to learn Everything. those teachers are all gone now... reincarnated into people happily confused and forgotten, knowing nothing of the origins and controls of this realm...)
nothing but in dreams 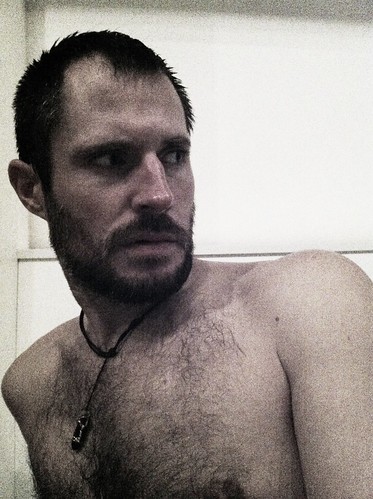 I was telling Koos
I haven't been taking many photos of myself lately
and when I do
I'm not much interested in how I look right now
so the images just stay on my phone
but I printed this one for him yesterday
after taking it and photoshopping it on my phone in 3C the night before
returning to my expressionistic form of my inner Egon Schiele
bent, twisting
not to say anything
just ill-at-ease on this plane