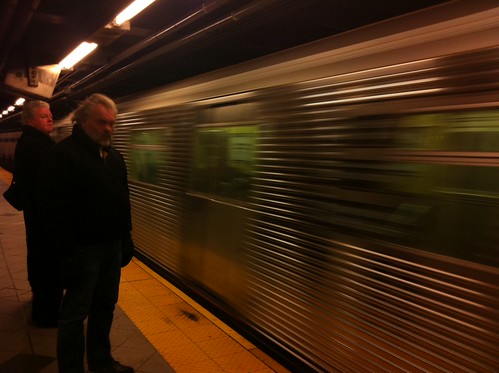 how many people have talked with me
assuming they are agreeing with me
saying "just live for today, enjoy"

maybe I was raised in a culture living for tomorrow
maybe many times I have made important choices for tomorrow while missing what's happening right now
hit by a truck
waking up bloody and confused
I mean, smelling the roses and all that

(I just explained: as cancer cells can be made aware of themselves as useless destructive individuals and destroy themselves... so can humans living entirely pointless lives come to self awareness that the best choice they could make would be self extermination)

but I was standing there on the platform
waiting for my train to come
and realized my trick of seducing myself into the future is not an original idea
and I don't imagine it's worked for the culture that raised me
nor the millions of others...

it works for a while
long as ya keep busy
but we're still trying to outrun it...

live:
to struggle against/with death
to embrace and dance with life