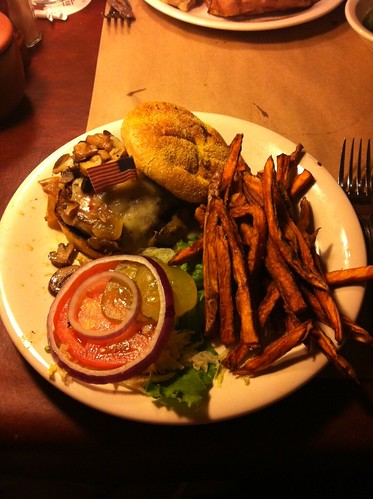 When I first left the country and lived in England I'd always say "In America..." referring to Indiana... coz it was the only America I knew... my many years of traveling after that, much in the USA, when talking about the world I knew of Indiana I would frequently mistakenly say "In America"... my mother picked me up and said we were eating at Trader's Point... I was excited: there is a creamery by that name started by some Dutch people near where I grew up: gorgeous and organic food. but my family thinks it's too expensive... she was referring to a strip mall that was a field ten years ago. my options were in there: Chillies. Long Horn. Abuelo's.
I chose Ted's Montana Grill because it looked like it might have some individual character. I was shocked to be greeted by two black servers (when I lived here it seemed entirely segregated) and our server was ridiculously stoned. i asked him if I got the flag coz he thought I was a Muslim terrorist... but I ordered a Bison burger, specialty of the house, the variety: Vermejo: the name of Ted's ranch in MT... and the sweet potato fries weren't on the menu: I'm a special request kinda guy. making the best of what I got here: In America...

(I'm just reporting this cox I typed it out in the comments on Facebook... & this is the non-HDR image)