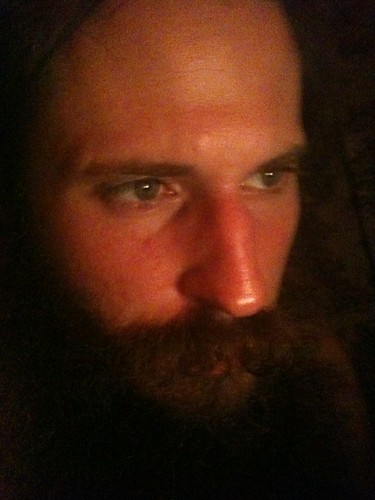 coming up from the underground in Brooklyn
past the guy who sits there all the time
today with his shirt off, rifling through his news papers
what does he want?
a pink sign taped to the wall flaps in the wind and I see another
crudely scawled, says "THIRSTY?"
an arrow pointing up
"HAVE SOME FRESH LEMONADE"
two kids selling lemonade from a little table
I couldn't not
and only 50¢
five dimes to you
it was alright
perhaps a touch of real and fake
not too sweet
the first corner I came to
I tossed the empty paper cup in the trash can
and saw many more of the same cup there

but hours later I felt odd for not talking to them (I was late...)
and wondered why I was so compelled to buy it..
I realized I had never seen boys selling lemonade from a table
metal pot from mom's kitchen
ladle
simple
and archetype
never before witnessed it my life

is this where life has been happening?
I get the feeling it wasn't where I was raised...
(
...the first time I saw a worm in an apple was in Italy in 2002... and felt the same way...
)
I did a casting today
(for another unpaying editorial for a big magazine I don't know)
the guy who interviewed me asked where I was from
and persisted on the name of the town after I said the state
he said he'd lived in Bloomington
which I countered, was an island
he asked how I meant that
"there are Asians there, for instance"
after a blurt about my parents moving to Indiana to get away from the blacks of Detroit...
the great white flight...

my parents are Still insulated from it
oh, my mom kinda works in the ghetto...

there is nothing in there for me

which includes throwing myself away

I'm lost in the continuity
- I don't know if I have grown
when it's been shown up to me
things I'd long thought surpassed were still current
how many times have I just pretended to forget my hitches?
thinking I could just slide through
til I got caught up again
untangled
denial
again

when will I ever learn?

and is this the work?
this writing
ok
yes
much of it is me working it out for myself
but for you
is it entertainment?
do you benefit?
does it detract from me?
somehow
I understand how editing for "you" weakens my powers of clarity and understanding for myself
but does the mere publicity of my inner workings release too much ...?

oh, one of you adepts who can articulate
express it for me so I may choose more wisely..