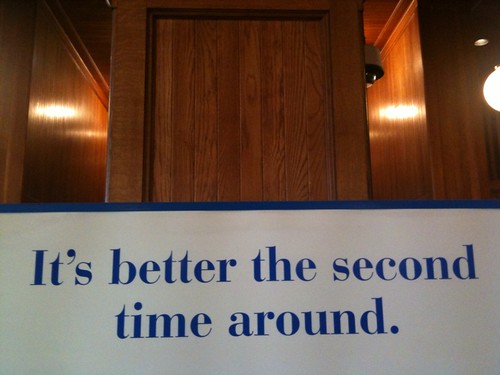 I spent the day upstate near beautiful Katonah playing Jesus (Christ) as President. the photos will be great...

you can read about our luscious pagan origins from Alpha Dictionary:


Meaning: The Christian holiday celebrating Christ's resurrection from the dead.

Notes: You might find it strange that we celebrate Christ's resurrection with rabbits and eggs. As in so many other cases (e.g. mistletoe and Santa Claus), these symbols have non-Christian origins. Because new life emerges from eggs, they have long been a symbol of the rebirth of nature in spring after its winter-long death. The Persians, Greeks, and Romans interwove this symbol into their spring-time celebrations.

In Play: Easter existed long before Christianity as a festival of spring and fertility (see Word History). That is why Easter is not directly associated with the date of the resurrection, but the day of the first full moon after the vernal equinox. The hare (now the rabbit) and the egg appeared as symbols of fertility in the original celebrations and continue today despite their pagan heritage. We wish all our Christian friends a happy Easter and our Jewish friends a happy Passover.


Word History: Easter descended from Proto-Germanic Austron, the goddess of the sunrise, rebirth, and fertility, Eastre in Old English. The root goes back to aus- "to shine" in Proto-Indo-European, the language from which most Indian and European languages derive. This word was originally aus- "to shine", and appears, with the S replaced by an R, in Latin Aurora, the Roman goddess of dawn. It is also at the root of German österreich "eastern kingdom", today the name of Austria if capitalized. Most Western European languages use a variant of HebrewPesach "Passover" for "Easter", as in Latin Pasche, French Pâques, Spanish Pascua, Swedish Påsk, but also Russian Paskha.


Oh!
so many stories to tell
I almost forgot to pass on a story someone told me

it was the easiest visual signifier to show he was alive again, flesh, all the blood was flowing
(hella morning wood, right?)

most of these pictures were destroyed by the church in recent times as they became more puritanical
(I don't remember the dates, a few hundred years ago)

some were just discovered though
some monks had hidden them in some abbey
probably for private contemplation (har har har)
.iP