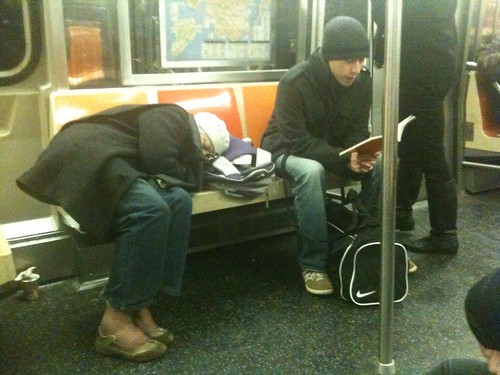 if I spend my time going home
every time I go home
writing about events
by hand even
by hand
or by finger.

I started the day drinking healthy intentions: greens, browns, bowel brooms.
I ate left overs
I felt all shakey
I threw out rotten food, forgot to take the bag out when I left tonight, now my apartment will stink
I procrastinated long enough
the load of laundry I had to do
did not have enough time to be in the dryer
so I took it out of spin-cycle and hung it all around my apartment..
perhaps now is the time to put up the poster?
or will there probably be less people at 8am on a Sunday morning?

I went down to Envoy to see Jorge read
late as I ever am
and waiting 20minutes for the A train
I calmed and confounded myself on the train by avoiding pop music and the rpg by watching Doug Aitken videos that have been on my iP for months. Tom seemed to not like him...
he seemed so full of ideas
far too many
equally bored and fascinated by them

They were an hour late starting, so i ended up being a half hour early... or right on time
I spent only moments rejecting Envoy and the scene... it became quickly clear it was just my insecure ego feeling threatened, thus demeaning that which was more powerful than I in an attempt to feel stronger
it occurred to me, watching doug aitken, that Succsess is about getting support, assets, resources behind you.
amassing power, like politics and money... to be able to wrap others' wills around your own ideas and make them manifest.
that is the magic of masses:
as said in that tv show: "I got clever and made them take their own [lives]"

I have learned, I notice, not to criticise unless asked to
no matter what my mind is doing
I don't voice it unless it is requested

after the first reader
the boy who organized the show asked if anyone was in a band? or knew how to turn up the sound?
I waited a few moments
ten seconds?
he said "no one?"
I stood up
because I can do anything
indeed
my fingers went right to the dial after only glancing at the soundboard
I told him I'm not in a band
but will be sometime...

listening made me feel that I didn't like poetry
I often feel that way
most poets I don't like
nor do I enjoy overly clever fiction that sounds like it's coming out of a creative writting class
that being said
I thought of taking a creative writing class
enjoying the assignments, feedback and community
while accepting I would not be doing the projects as she'd like me to
using sensual allusions, similies that force the flavours into the readers mouths
I think I want more sparseness
like the translated existensislisms I read as a child that made my mind work so hard to full in all the holes, cultural and literarily that weren't covered in the translation

i had fun taking pictures
if I had an iPad
could I edit the photos I took on the train heading home?
make my selections
and set them to upload as soon as they got on the network...

a boy sang at the end of the readings
a tall chubby boy
with a forced virbratto
an attempt at demure masculinity
I may have liked him a lot
because he embarrassed me
and I kept wanting him to stop
but while he sang songs I could not follow
I imagined them better with sweeping orchestra or punchy jazz band
such sincerity I didn't trust
or fall for
but hey
he's chubby, tall, big, no sense of style ( stupid grey tennis shoes )
long hair! badly braided in two tails
again, his clunky masculine attempt at being a little girl
stubbly dark hair where his beard should have been, instead of just his thick throat
I wanted to like him
like I want to like Anthony Haggerty
how come I don't?

I don't trust my rejecting voice
I don't want to say I should be more "positive"
I thought about it, perhaps a better word would be "procreative"
but all these words have messy connotations
when what I'd like to do is be more supportive
to say yes to what is happening
trust and love it
help it happen
see the beauty in it
pour out nourishing milk from my heart to make it stronger, prettier, smarter, greater

not poison milk
not strangle it's throat