Grey...
except when they're Grey...
totally Zane


when i was in indiana
on the way to michigan
in my father's gigantic diesel Ford Excursion
we listened to an Audio book called
"the Call of the Canyon" by Zane Grey
told from the perspective of a rich society lady from New York (a hundred or more years ago... more, i guess)
all sorts of heavy-handed comments about our society were made

one that has stuck with me the most was this

-- she gets back to the ranch after succeeding a long horse trip on a wild stallion
there's a big dance
so she celebrates by wearing the Wildest dress she has!
of course! the girls! like to Scandalize! whoo-hoot!
some big mexican farm hand flirts with her outside
she blows him off
and make a comment to someone else about the occurrance
her beau has a big brawl and the mexican gets fired

weeks later
she encounters him alone in a cabin in the middle of nowhere waiting for her beau to show up
he says
'well, we're alone now, i'm gonna come in that cabin with you and make some sweet love to you'
or however cow-boy mexicans a hundred (or more) years ago would have said it

she's appalled
and, more, frightened
and begs him not to

he says
' you dress to stir a man's passions... yet you don't want to enjoy the pleasures of the flesh... you're a Liar! why work such trickery!? why present yourself as a sexual person wanting the love of a man and then not accept it?! you city people are crazy. '
and saunters off into the ... afternoon

some big realization is made about it in the book
and i promptly forget.


Tonight
i watched "The Wrestler"

remarkable
because it didn't really ever make me feel terribly sad or heartbroken like the last few films i've seen
-- i felt those ways... but not in a spirt-crushing way
the ending scene was pretty amazing, yeah...
good movie
BUT
the last time you see the dancer
really working her ass
holding onto that pole
-- the director did an excellent job telling that same tale:

this woman did not want to love
did not want sex
yet was working with all her energy to make men WANT to have sex with her
and, as a dancer and -sexworker- to have men love her

(one of my cousins married two strippers (with the same name, actually) and i often wondered why or how that could have happened... i've never really spent time in a strip club, but this movie let me understand...)

it all kinda crashed down around my ears
as i imagined some equal conversation someone had with me in the past
... i don't know if it actually happened
if i dreamed it
if it was a conversation that happened about someone else
or about me
in europe
or in america
in a bar
or with a Client

i don't remember
but the FEELing of an older man talking with me about how I was misrepresenting what i wanted
how i was making him believe i wanted sex or love
but not wanting that at all. . .

indeed
when i was much younger
when i first started flaunting my nudity
i never thought of it as a sexy thing
a flirtatious thing
i just liked being naked
i wanted others to be naked
yes, sensual
but not sexual
and many men called me a tease
because i made them want me
and didn't want their advances

-- i was not actively trying to turn these people on. . . yet still, my ignorance of our social mores...


i had a client
i meant to write about him..
he was a fat hairy sexy bear guy
sexy, kinda: he was fat in an unhappy/unhealthy way
yet i enjoyed him and found him fun
but i could tell (his emotions were loud) how unhappy he was

he didn't really want a massage
and it was mostly sex
but mostly the attempt to make him feel loved
and when he came at the end
he cried and SCREAMED and whimpered
" i wish you were in my life always so i wasn't alone. i wish you loved me. i wish you were mine! "
it was so terrifying and sad
i did my best to give him love
but it made me aware of why my heart is so often worn out


i'm certainly confused and confusing about what i want in life
how i want a companion
how i want to be alone
how i want love
how i want . . .
some ideal
how i'm holding out
and holding it in (as that song goes)

i don't know how
but i told him about two friends of mine in brooklyn
who have a pretty happy healthy relationship
they've been together nearly 20 years
they are both pretty happy and successful in their professional lives as well
and both of them say things like this
"oh! i did that once and what a mistake! i never did that again!"
"oh, yeah, i had one boy friend and it went like this: _______. so i learned my lesson and never did that again"

really
just Once
and they learned their lesson.

the cliché'd definition of "insanity"
look at the state of the nation! 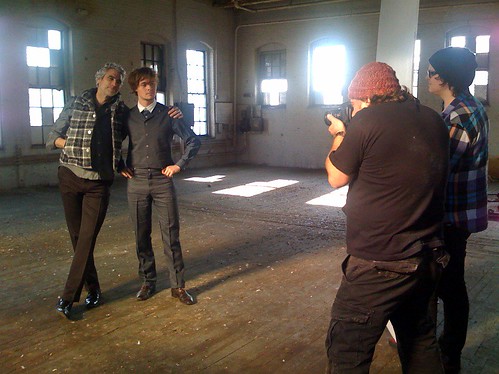 The Model, by Kraftwerk, as performed by Big Black, from their album "Songs About Fucking"