childhood memories i have forgotten:

my father is color blind (and left handed, but i always think of that)
my mother got him a sweater: rust and musty green
"what color is this?"


apparently
i alway wore many layers of clothes
-- i don't remember this
but in the last few weeks
as new york has got cold
i have been putting on layers and layers...

the day before i left:
two pairs of pants
six layers on top

when i arrived
they all told a story, laughing
of when we were at Red Lobsters
some waitress poured the pitcher of ice water on me
(it was my birthday: i loved PopCorn Shrimp)
i just stood up
and took off my outer layer of clothing:
everyone stared in amazement

head stands
i love them
yoga
when i first learned it
i did them all the time
and have been doing them a lot lately. . .

childhood
i got it from childhood. 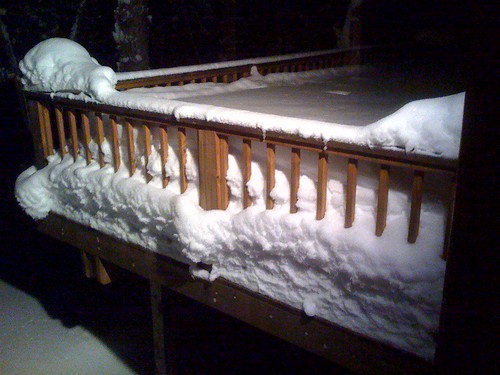 We just got to "the cabin"
My father's "hunting lodge"

There's a lot of snow up here
At least three feet of pack...

And over 40 taxidermied animals (more reporting on that later)

when he got off the phone
he started shoveling the front porch area....
even though it was obvious he'd paid someone to do that before we arrived
he was somehow futzing with the details

while we finished unloading the car

that's fine
he'd just driven up from indiana, then from detroit
that's alright
he could have just said "give me a rest, would you please unpack he car"
we might have been pissy, but not in passive aggressive ways...

who was it?
some one was just telling me that Men always feel like they need to be in control
and so many Wives have learned that if they take their own personal power
the men get all threatened and freak out
so the women, when they want something done, have to act passive aggressively
so the men get to say "See what i did for you, Honey? what a great idea i had!"
and she gets to seethe silently... even though she got what she wants.

a million ways
cowardice or just being polite
mother fucker..

he went off to play with the snow blower
didn't ask for help
just walked off while we arrived into the house
-- i called my brother and he told me where i could find the password
it was a long hex key
and seeing that my father figured there wasn't a password
i just went into the router and turned the WEP off: why would we need it in the middle of the forest?
and i'm sure, once the other relatives arrived, they would have laptops too
why bother with all these silly passwords?
i just turned it off.

mom warmed up some soup
or something
we were sitting around eating
dad came in and opened his laptop
not speaking to us
i was fiddling with my iPhone
he said "you got it to work, yeah?"
i kinda laughed and said "yeah: no problem"
he grumbled and said " now i can't get on line... "
i told him to just re-select the network and it would be fine
silence for a bit
i could see he was having trouble
so i told him what i did and why...
before i could tell him he just needed to turn off his wi-fi and turn it back on
he exploded at me:
screaming at me about how i fucked it up and how it all worked fine and i broke it
i explained i did it because he thought there wasn't a password anyway, so i figured he wanted it like that and it would. . .
he said he didn't want to hear it and i reminded him he was barking
he exploded louder
i reminded him i was right there
and started mocking him
that he obviously didn't care enough to pay attention to what i was saying, so why was he talking to me?
and that if he would be quiet and listen to me i would explain why he didn't need to be angry
but he was upset i had fiddled with his network without asking
-- fair: i should have asked
but him exploding and screaming at me would not make the situation any better
my mother came up and screamed at him for screaming at me
i told her to get out of it: don't take it on it's not yours
my father told me to get out of here and leave
he called me selfish
i told him i learned it from my daddy
he screamed at my mother, telling her to tell me to stop bothering him
he was screaming at the top of his lungs
"i just want some peace!"
my sister and mother were at the point of tears and i told them to get out of it: it's not for them
they stormed off downstairs
i sat quietly while he fiddled with his computer trying to get it to work
he yelled at me a few more times
so i went downstairs
and told my Women-folk that he's like a dog:
if you let him get away with that shit
he'll just continue to do so
and it makes me feel so terrible
that i just won't let him get away with it

-- they bitched about him for a while
-- they live with him, it's understandable
he came down and yelled at me a few more times
we flipped through the TV channels (after i figured out how to use the DVD player, but he didn't want us using it without him so we wouldn't "mess it up" -- control freak )
we watched the last hour or so of "Christmas Vacation"
which my sister had been searching for the DVD before we left the house: here it was on TV
eventually my dad got on line
and chilled out
and didn't talk about it
but came down stairs and watched the next movie with us:
Meet the Parents

i hate TV
movies are alright
but i mostly hate comedies too.

we went to sleep in a cloud that night
and the next day there was a lot of silence
but i did my best to push through it
... my sister felt he was most angry at her..
and, of course: he needs someone on his side and no one seems to be fulfilling that role with any fidelity.
Collapse