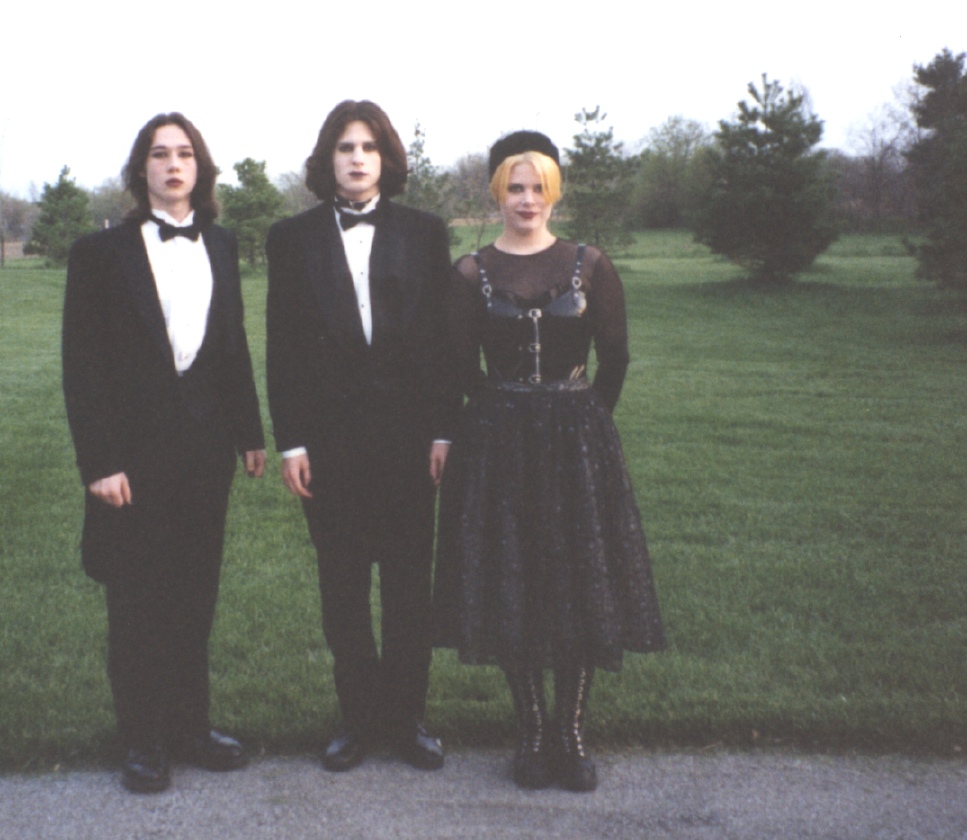 he came grinding me into the floor as usual
but this time
i then flipped him over
and held him down
and rubbed until i came on him
-- against all of his protest:

this is the only time i ever came with him.


before i knew he was moving away
i had tried out for Show Choir
at our school, called "The Royalaires!"
i sang Depeche Mode's "One Caress" to him on the black stage

i got accepted into Show Choir
but, of course, he was gone
and we had some blonde bitch teaching us
who just wanted to be Madonna


the big deal over that summer was The Academy:
it was some boarding high school that was a part of Ball State
an hour north of us

Trevis and Ryan applied
and told me i should too

Dustin had moved away the year before
(i remember, i bought a copy of Radiohead's "Pablo Honey" for myself, but gave it to him before even listening to it, it wasn't until was 16 that i stole a copy from BB and heart it the first time... and became completely enthralled in it)
and Sheridan had such a good GPA she had worked out a deal that she was graduating in one more year instead of two

i asked my parents if i could apply to the Academy

but my father said
"No, don't even apply because we cannot afford it"

i was so crushed

i wanted to love him
but at the time
i couldn't have said that.

i constantly talked about how i was living dead

i prayed for death

i felt like i was lost in the middle of nowhere...

i became devoted to Nine Inch Nails
-- i'd been listening to them for a few years
but "The Downward Spiral" had just come out
and it had been on constant heavy rotation
(backed up with Throbbing gristle, coil, pigface, etc.)

NIN was playing in KY
and i drove down there to see the show
I remember it as being such an amazing experience:
Unified with hundreds of people in such desperate anger
-- i remember seeing these two huge muscular marine guys
punching people and stomping them in the mosh pit
laughing
and biting eachother's forearms til they bled

it met this great punk girl there named "Melanie"
we became instant friends
she lived in Indy
and i started hanging out with her all the time
-- she said i looked like Trent
and i'd sleep over at her place
but we never fucked...

i walked him through his world-opening experience
and envied him

but the trip made very clear to me:
he didn't love me: he longed for Sheridan
and i was just his Buddy in this trip

i wanted to die

somewhere in that visit
he told me that The Acadamy was paid for by the state
it didn't cost any money, except for books
which we were paying for in high school anyway

my father and i only interracted while screaming at this point anyway
and i told him he had three options:

to send me to a boarding high school OUTSIDE of Indiana
(our good friend Mike had just tried to commit suicide and had been sent to a mental hospital, his parents moved him into a private high school in michigan: cranbrook in royal oak )

or
to send me on foreign exchange:
i wanted to live in Germany

OR
he could do nothing
in which i'd either die or kill myself
or run away: and he'd never hear from me again


my mother and father knew i was quite serious
and we looked into the options...

Daniel, introducing us to so many amazing new british bands
made the blunder of recommending Oasis to us
and though we didn't love them so much, they had some good tracks
(it was their first album)
they came to Indy at the end of that winter
so we went to see them
Again
we got Acid
but this time
we were assured it was good stuff

i think we took it on the drive down there
(zionsville was about 45 minutes from down town indianapolis...)
and i remember the opening band... Velvet crush?
something
i remember laying on the floor in the back
sinking into the floor
becoming the floor
watching the orange and yellow lights stream into me
feeling everyone

Then Oasis came on
we all stood up and got near them
and in the beginning of the 3rd song
somebody threw something at Liam
and he exploded and told us to all go fuck off
and they left.

so we went home

i remember smoking a cigarette
my foot dangling out the passenger window:
it was the first time i'd ever enjoyed a cig
i could feel it moving through all of my blood vessels
and loved the red light it made

we went back to Ted's house
and i thought about Mike
and why would anyone try to kill themselves?

and then i got it:
i understood suicide
and then i was terrified:
i couldn't think of any reason why to stay alive
and i started asking my friends
-- they had no good suggestions
but they had to go home
and Ted needed to go to sleep
i was panicking
so Ted took me down stairs and fed me a Gravity Bong
-- i'd never had one before
and it spun me out

we went back up to Ted's room and he turned out the lights and told me to be quiet
i turned myself inside out
and examined the smallest details of existance
any question i posed
i could get an answer for
... the question i asked...

and i kept looking
and eventually i gave up: i couldn't find it in myself
i switched on a little reading lamp
put on the head phones
played "Strageways, here we come" (which i'd never got into before)
and read "On the Road" (which i'd never read before)

somewhere in those tombs
i found respite
and could go to sleep...


Life Persists... it drags us along sometimes...
and... you know... i was a Sophomore...
and there was a lot of pressure for us all to go to the Prom, right?
well...
yeah
we did it like this:
Ted went as Sheridan's date
both of them dressed all in brown
Sheridan in a tight evening gown, brown makeup
Ted in a 70's pimp outfit

my mother cried
my father called from Hawaii the next day
asking if i was TRYING to destroy the family's name.

lots of kids i'd "known" my whole life didn't recognize me

there was line dancing
we went out back and got stoned

came back in and ate
and ate

and laughed
and left

went back to my parent's house
and got drunk out in the barn...

when he got my blood work back he said
"you know what AIDS is, right?
well... you don't have HIV
but we would say you have AIDS
your T-cells are at about 70 and your body is completely out of balance...
but we have no idea why...
the best then i can offer you is to give you medication to kill everything in your body so that your immune system has a chance to rebuild itself"

i sighed and declined his offer

Daniel's mother was a nurse
and he told me i didn't have AIDS
i just hated my life and as too lazy to slit my wrists:
this was my passive suicide

my dad chose England because it seemed cheaper and closer.

as the school year ended

i'd completely lost hope in any sort of redemption

but i paused a moment to grab my journal:
i wanted people to understand the gravity of WHY i was doing this
and not just think it was some stupid teenage-isolation bullshit

when i finished writing
i walked out into the sun

somehow
i'd managed to stay alive.

{somewhere in here is when i decided that "coupling" was always to be a poisonous endevour... what i'd seen of boyfriends and girlfriends in the midwest... every relationship i'd ever witnessed of the parents and the love songs on all the CDs, radio and in books and poem... : Coupling was a curse: surely i had far too many important things to do... destroying, remaking, fixing, healing the world to get caught in that trap... fuck and "love" was a lie anyway... some sort of "dirty trick", a myth... like santa clause... oh, . . . }
Collapse