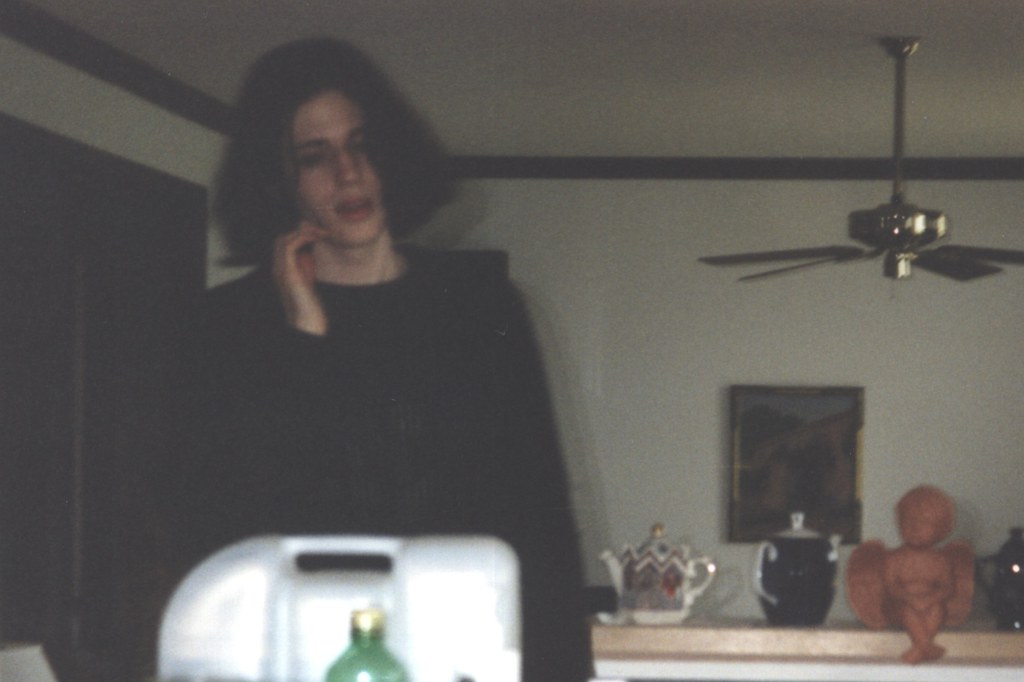 my hair was growing long

my patience was growing shorter...

TJ was born in 1977, august 1st
so that summer, before the school year started
he got a car
and drove us around:
more freedom

not wanting to be kept down
i taught T and S the secrets of good shoplifting
an we started going in and out of Best Buy a few times a weekend
using our expensive scientific calculators to store a tally: to see who'd got the most CDs... we shared them all, of course
... we even started going into Boarders Books
laying down our largest back pack
and just filling it up over a few hours
zipping it up
and carrying it out

a few months later
they installed cameras:
but we never got caught

he'd walk around mumbling/screaming
"meat! Milk!... raw Meat.. in a bowl of Milk.... feed it to your kids"
shit like that

TJ was heavily into Burroughs even then...

That summer, when we started driving around
i dropped the "Nick" and became "Dominic"
Sheri became "Sheridan"
and TJ became "Trevis"

we were struggling for our freedom
and because there was absolutely none in sight
we were searching in our imaginations
with our desperation...
looking for a way out
and a way to survive...

that summer...
we started hanging out in Broad Ripple
the "cool" part of Indianapolis

i met some girl named Heather
(and have met a million more of her around the world since)
you know, loves gay boys, chubby girl with black (natural?) hair
always wearing black clothes. . .

the first night we met she said
"oh my god! you have such beautiful eyes, can i put makeup on you?"

the school just wasn't cool enough for me, though

through all these years
i'd alternated with my brother

at this point: it was all mine

through the school year i started stealing my dad's delivery vehicles (well, i knew where they kept the keys.. and i had a master key to the building)
they were manual transmission
so i'd drive around the parking lot grinding the gears
until i figured out how to switch from first
to second
to third...

i'd sometimes drive over and see ted
and we'd go to Denny's late at night
or Steak N Shake. . .

we were producing a Zine on my father's copiers in the office
sometimes Ted and his friend PJ would hang out with me there. . .
and sometimes my old friend Bryan

in those first two years of high school
The Lab became a place of freedom
in the off hours...

(he was so shocked the first time i showed up)

we'd take off our clothes and tear into eachother

he'd punch me
and grin at me
totally under his control

i wanted to feel something
-- anything


Trevis had even taken to cutting himself

things sure were swell in Zionsville...


sometime in the middle of the school year
the principle had a word with Satyr
said "you've seem to have been spending an awful lot of time around that boy, do me a favor and stop that"

i had a total break down


near the end of the year
i'd dropped the boys club job
(maybe long before, i couldn't have worked there when i was stoned all the time: i don't remember)
and ended up getting a job at a restaurant that Sheri and Ryan worked at called The Pie Safe
it was right on Main Street Zionsville

i would steal caffiene pills
and mini thins

i pretty much only ate Twizlers and Doritos

and i started getting sick all the time
Started...
it got much worse...

one day, i was home all day
and a guy knocked on the front door

my dad had an alarm system installed:
i hit the "fire" button and ran outside

smoke billowing out the side of the door...
the dog running around barking its head off
(at this point i hated dogs
and my dad had got a hunting dog that he and my sister were supposed to train and show
they had it out in the old hay barn: with a heating lamp that it had, apparently, knocked over)

... i didn't know any better
and the draft almost sucked me in

i stepped back
and watched the metal ceiling begin to melt

the rabbits were on fire
screaming
running around in the grass

the fire department came and did their best
but it was all burnt up by that point
.
.
.

what was i saying?

near the end of the year
Trevis got us some acid
and i skipped school and went with him and Sheridan to drive around down town Indianapolis
... on acid.

but it wasn't real acid
it was rat poison, i think

i got terrible cramps all through my body
and became increasingly violent
strangling trevis: leaving bruises on his neck

being dropped off at home
staring at the carpet
as it undulated below me
i put on the Reservoir Dogs sound track
and suffered in how much i hated the world
and everyone in it.
Collapse