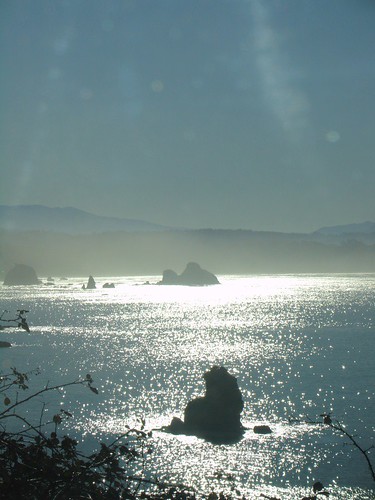 i sorted through my stuff

first time i've ever traveled with so little

Leo always travels with only one small bag

so i'm emulating that

i always want to bring things
to be prepared
to have the things i like
that i know most people don't have.

but i don't need them.

i drank my single malt scotch

and went to sleep.

amazingly
it was Leo this morning who made us late

i had hoped to sleep in later than he
but his banging around (bull:chinashop)

so i stretched
organized a bit more
even further!

and i took the wheel

drove us up to Trinidad

there was a thick layer of frost Everywhere.

i dropped Leo off at the "Lesbyterian" church
where he was facilitating a community workshop all day
and
seeing that i wasn't properly awake
i drove down the road.

dunno: never been here before
i stopped the car about 150 feet from where i left Leo
-- parking spots overlooking the Trinidad Bay

she was very excited about me reading it

and as i got into it
i could see why:

it's about how much a son loves his mother

but it kinda creeped me out

it was in that slightly gross way that Oedipus loved his mother
that i perceive most straight men as dealing with their sexuality:

doesn't anyone ever see?

sometimes it's a curse to see things clearly

it's an ignorant/painful life to read about

and though it is working out the arduous tale of how much he loves his mom and how sad he was he let her down
then he gets one more day to make it up (to himself)
it has (so far, i only got through half of it today)
just a tale of the damage fathers inflict on their sons
who inflict that on their families
et cetera
et cetera
et c. . .

so it's a major bummer for me
mom get's off scape-goat-free
(though he is starting to rag on here in the middle of the book, it's all portrayed in the light of how he wasn't having compassion for her... fuck forgiving the father)

in the midst of reading this
i more clearly understood that it was my Mother's betrayals of me (as a child) that caused my huge trust problems
--- i always knew my father didn't love me, so it wasn't a big deal
but my mother
that's like.. all she had when i was a kid
to let me down
let her self down

-- i just don't trust anyone on that level

so
as you see
i'm on a major bummer

i got out of the car
and breathed the clean air

then got back in the car
and drove out to Patrick's Point
(via a supermarket: chicken legs and water... and chocolate almonds)

everything conspired to lead me there
the supermarket lady said "just take Patrick's Point Road"
to get a key made...

i took the back way down

even though every local was parking their cars on the side of the public road
then walking in
i drove in
paid the $6 day-use fee
(coz i'd never been here, didn't know the layout)
then drove all the way through the park to the Agate Beach lot
empty but for one other car
i got out of the car and felt the sun

i headed down the trail

there was frost in all the shadows..

the trail was very wide and flat
very well maintained

is it like this for wheel chairs?
those little battery things

i fucking hate staid shit like this in nature

immediately
i was plunged into forest

smash your TV and have adventure

i followed the trail over frost
through leaves and other cliffs
... to the stairs
as a nice boy/girl couple came down the main path

i talked to them
she giggled

it took me a while (probably just a few seconds, but enough to jam my thoughts) to see what was happening
i'd never been on a beach such as this
something about how deep the sand must have been:
this mountain stream poured THROUGH the beach
not over it
to the sea

(i'd never seen this before)

the beach was big dark sand
strewn with rubbish
white/translucent sea weeds
lots of red-wood driftwood
and garbage: shoes, cups, scarfs... or something

-- i got to a place where there were many pebbles
and saw them:
beautiful greens and reds
whites, mottled darkness...
agates
jasper
jade

beautiful
i spent however long
picking through little stones
and showing them to dennis.

Dennis was with me now

for about six years now i've decided there is no point to traveling alone
anything beautiful needs to be shared
or it's just . . .

well it's not anything
who the fuck cares?

so i journal
i take pictures

and i often meditate
connect with friends and lovers
and beam my experience to them
listen for a response... or echo

i didn't find any
but i asked a nice old rock-man to hold my stuff for me
and went hunting
-- he was very kind.

the tide started to catch me
a few times i'd be crouching over something small
on a tiny rock surrounded by water
and it would suddenly start to rise, quickly
i'd have to jump over to a larger rock to keep from getting soaked

i began to be scared i'd been there a long time and the tide was coming in
was i going to be late to pick up Leo?

so i made my way back

the rock-man gave me my stuff back

they came back together a few minutes later

and fat old grandpas
with their grandmas
hmmmm

the sun was warm on my neck

then it wasn't
i felt a chill
and decided to drive

i clambered
afraid i might die
alone
no one to see

dennis wasn't Here with me

i got some nice pictures
and came around under
and followed another dear trail up
(oh, there was a nice open one... near the two rocks standing together, couple... and patrick point itself... with a nice couple sitting on top)

back to the car

looking out at the lower tide in the bay

until Leo was done


i've got some plans
(as we passed the beaches, the waves crashing)

we're gonna drive up the coast
all the way to Astoria

then we'll spend a few days in Portland

then we're driving back down.

i need to sleep now.